Home Therapy News It's High Time to Finally Talk About the Big Elephant in U.S. Classrooms 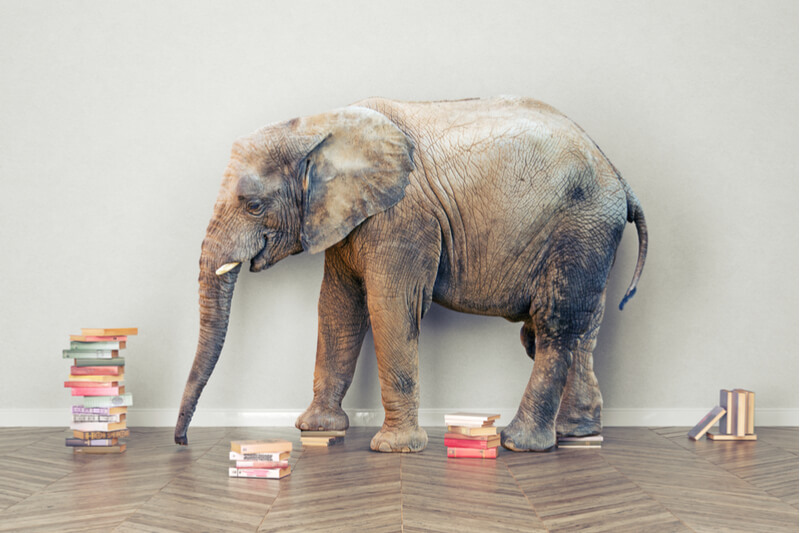 They Shoot Crazed Elephants, Don't They?

“I bought my friend an elephant for his room. He said thank you. I said, “Don’t mention it.”

There’s a really, really, really big elephant standing in the way of student achievement in U.S. schools, and practically no one is talking about it. No pun on a pun intended, but that elephant’s appetite for true student success grows more and more insatiable each school year. Its ass is too big to lead it out of the classroom now, but it’s high time we finally talk about it, and put our money where its mouth is.

The elephant in every classroom at one or more times each year across this nation is the substitute teacher. It’s not teacher absenteeism. It’s not student misbehavior when subs show up. And it’s not inadequate compensation.  Too many educational pundits speak of everything else that could be wrong when “subs” come to our schools, but they rarely tell the bare-naked truth: most substitute teachers are just plain shitty.  It’s not that they don’t or won’t teach; most of them can’t.

All statistics aside, this is the conclusion I have come to after teaching in classrooms for 18 years and administrating schools for another 17.  I had to call on subs to take my place from time to time when I was teaching, and frankly, it was so much work getting ready for a sub, I would often, when I could, just tell my principal, “The hell with it, I’m not going to go. It’s just not worth having to come back and repair all the damage that will be done from my sub being with my students, for any amount of time.”

As a principal, I had to turn away subs sent to my school by the district office, telling them I would rather have my other staff cover for their absent colleagues, which is a true hardship, but well worth the complaints that ensued.  Sometimes, I just covered the teacher-less class myself. It gave me a chance to get to know some of my students better, even though it took me away from my mounting office duties.

“On average, teachers miss 11 school days and are considered “frequently absent,” education author, Allie Bidwell wrote, citing a report by the National Council on Teacher Quality, in her 2014 U.S. News article entitled, ‘Teacher Absenteeism Can Hurt Student Achievement.’ “Many missed 18 or more school days, or about 10% of the school year.”

A previous report by the National Bureau of Economic Research, 2012, posted that when teachers are absent, there is a significant decrease in student outcomes. “If teachers are not there, they’re not going to have the positive impact that they would have.”

Teacher absences do disrupt the natural daily flow of the school day…for everyone. It puts an undue burden on the other teachers, especially if the absences are unplanned. And it does cost the district an arm and a leg to pay for substitute teachers, spending buku bucks on a service that does not deliver on its inherent promise to keep our kids’ education skipping along without missing a beat.

Mary Bigelow, writing about the safety concerns that arise when substitute teachers are called on, in her 2014 article, entitled ‘Safety and Substitute Teachers’, explained: “Experienced teachers are hard to find…[and] some students take advantage [of them].”

“Students act differently (or simply, worse) when they have a substitute teacher,” Sammy Kanes recently wrote in Student Voices, ‘The Substitute Teacher Effect.’ “It has been that way for so many generations that it is regarded by many as part of the school experience.”

Teacher absenteeism is not the problem, but it does indeed create a stage for a very real problem to make an appearance upon the classroom stage. And it’s not misbehaving students that are the problem, but the respect that most all substitutes do not command, certainly invites students, like mice, to play their hearts out, while the cat’s away.

Compensation isn’t the problem either. It’s not true that schools get what they pay for. Due to collective bargaining battles over the last few decades, districts have been forced to pony up quite a bit of money to make sure their regular rank and file get the sick leave and time off their unions say they deserve.

“Substitutes are particularly ineffective in high-poverty area schools,” the report by National Bureau of Economic Research confided. Which makes the problem I am talking about even worse, and the achievement gap even wider.

For years, when I would talk with my own students about skipping school or misbehaving when they learned that a substitute was covering their class for the day, they would most often say: “We’re not going to learn anything, so why not?”

Sammy Kanes, a substitute teacher himself for 3 years, told of his experience, that students literally cheered and danced when they found out he was their sub, and then proceeded to make his life a living hell for the rest of the day.

“Their work in a majority of cases is more or less inefficient,”

--Byron Kirby, more than 2 decades ago in his article, ‘The Problem of the Substitute Teacher.’

Substitutes are often called to teach in positions for which they have no experience, either in the subject matter or the grade level. They are not professionally vested in being the best they can be. They don’t know the students or the school they are supposed to serve.  At best, they “wing it” day in and day out, doing only the minimum expected in order to collect a paycheck.

It has been my experience that most substitute teachers have little or no training, practically no ongoing professional development, and are only available on sub-lists because they could not get hired for a full-time position. And these are the people we leave our students with when we have to be away, or when we choose to be.  There is nothing comforting that I can see in that dark arrangement.

They don’t prepare the lessons, and they do not grade student learning efforts. Where’s the “skin” in that deal? The bottom line is our students should not be handicapped educationally by someone who is only available to “teach” them because they basically cannot do so.  That, I think, is the sad epitome of dereliction of duty by our schools.

I smell a lawsuit of unprecedented proportions coming down the pike. It’s high time educators did even more than talk about the elephant in U.S. classrooms.  It must be "shot," and drug out of the classroom, once and for all.

Ping Pong Player With No Hands Won't Let Anything Stop Him