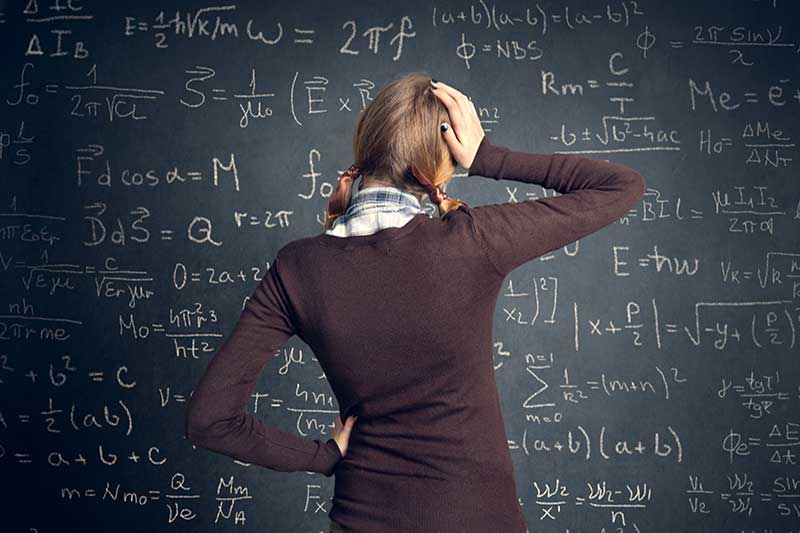 Should American parents of teens and young adults be stressed out by the climbing numbers in our populace that cannot understand and solve basic math problems? Many of us have gone to great measures to insure that are own children are not another statistic in the "math illiteracy" column. But this New York Times article points out that the way mathematics is taught in this country may be a part, if not the problem itself.

The Wrong Way to Teach Math

Here is an apparent paradox: Most Americans have taken high school mathematics, including geometry and algebra, yet a national survey found that 82 percent of adults could not compute the cost of a carpet when told its dimensions and square-yard price. The Organization for Economic Cooperation and Development recently tested adults in 24 countries on basic “numeracy” skills. Typical questions involved odometer readings and produce sell-by tags. The United States ended an embarrassing 22nd, behind Estonia and Cyprus. We should be doing better. Is more mathematics the answer?

In fact, what’s needed is a different kind of proficiency, one that is hardly taught at all. The Mathematical Association of America calls it “quantitative literacy.” I prefer the O.E.C.D.’s “numeracy,” suggesting an affinity with reading and writing.

Calculus and higher math have a place, of course, but it’s not in most people’s everyday lives. What citizens do need is to be comfortable reading graphs and charts and adept at calculating simple figures in their heads. Ours has become a quantitative century, and we must master its language. Decimals and ratios are now as crucial as nouns and verbs.

It sounds simple but it’s not easy. I teach these skills in an undergraduate class I call Numeracy 101, for which the only prerequisite is middle school arithmetic. Even so, students tell me they find the assignments as demanding as rational exponents and linear inequalities.

Is the Math that American Schools Teach Relevant to the Real World? Does it Matter?

I’m sometimes told that what I’m proposing is already being covered in statistics courses, which have growing enrollments both in high schools and colleges. In 2015, nearly 200,000 students were taking advanced placement classes in statistics, over three times the number a dozen years ago. This might suggest we are on the way to creating a statistically sophisticated citizenry.

So I sat in on several advanced placement classes, in Michigan and New York. I thought they would focus on what could be called “citizen statistics.” By this I mean coping with the numbers that suffuse our personal and public lives — like figures cited on income distribution, climate change or whether cellphones can damage your brain. What’s needed is a facility for sensing symptoms of bias, questionable samples and dubious sources of data.

My expectations were wholly misplaced. The A.P. syllabus is practically a research seminar for dissertation candidates. Some typical assignments: binomial random variables, least-square regression lines, pooled sample standard errors. Many students fall by the wayside. It’s not just the difficulty of the classes. They can’t see how such formulas connect with the lives they’ll be leading. Fewer than a third of those enrolled in 2015 got grades high enough to receive credit at selective colleges.

Something similar occurred when the Carnegie Foundation for the Advancement of Teaching created a statistics course for 19 community colleges in 2012. It was advertised as an alternative to remedial algebra, with its sadistic attrition rates. In Statways, as it was called, here is some of what students were asked to master: chi-square test for homogeneity in two-way tables, line multiple representation of exponential models. Even with small classes and extra support, almost half of the students got D’s or F’s or dropped the class.

The Carnegie and A.P. courses were designed by research professors, who seem to take the view that statistics must be done at their level or not at all. They also know that citizen statistics is not the route to promotions. In the same vein, mathematics faculties at both high schools and colleges dismiss numeracy as dumbing down or demeaning. In fact, figuring out the real world — deciphering corporate profits or what a health plan will cost — isn’t all that easy.

So what kinds of questions do I ask my students? 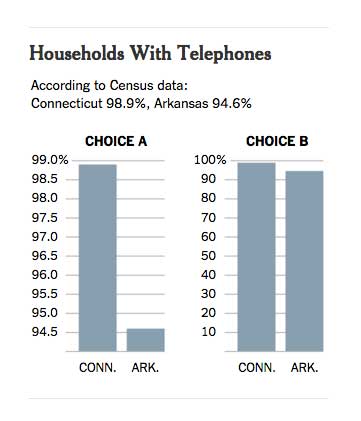 One exercise focuses on visualizing data. I have the class prepare a report on how many households in the United States have telephones, land and cell. After studying census data, they focus on two: Connecticut and Arkansas, with respective ownerships of 98.9 percent and 94.6 percent. They are told they have to choose one of the following charts to represent the numbers, and defend their choice.

The first chart suggests a much bigger difference, but is misleading because the bars are arbitrarily scaled to exaggerate that difference.

Other tables focus on changes over time. Fertility rates for white and black women in 1989 stood at 60.5 and 84.8 per thousand, a discernible difference. By 2014, they were 59.5 and 64.5, a much smaller gap. There’s a story here about how black women are reconfiguring their lives.

Finally, we talk about how math can help us think about reorganizing the world around us in ways that make more sense. For example, there’s probably nothing more cumbersome than how we measure time: How quickly can you compute 17 percent of a week, calibrated in hours (or minutes, or seconds)? So our class undertook to decimalize time.

Imagine if we had a 10-day week, each day consisting of 10 hours each. The class debated whether to adopt a three-day weekend, or to locate an “off-day” in midweek. Since a decimal week would have 100 hours, 17 percent is a flat 17 hours — no calculator required. You have to think both numerically and creatively if you want to, say, chuck out our current health care system and model the finances of a single-payer plan.

Mathematicians often allude to “the law of the excluded middle” (a proposition must be true or false). The same phrase could be applied to a phenomenon in our own backyard. We teach arithmetic quite well in early grades, so that most people can do addition through division. We then send students straight to geometry and algebra, on a sequence ending with calculus. Some thrive throughout this progression, but too many are left behind.

The assumption that all this math will make us more numerically adept is flawed. Deborah Hughes-Hallett, a mathematician at the University of Arizona, found that “advanced training in mathematics does not necessarily ensure high levels of quantitative literacy.” Perhaps this is because in the real world, we constantly settle for estimates, whereas mathematics — see the SAT — demands that you get the answer precisely right.

Indeed, it often turns out that all those X’s and Y’s can inhibit becoming deft with everyday digits.

This article was first published by the New York Times and originally written by Andrew Hacker, who teaches Political Science and Mathematics at Queens College and is the author of the new book: "The Math Myth and Other STEM Delusions," from which this article content was adapted. 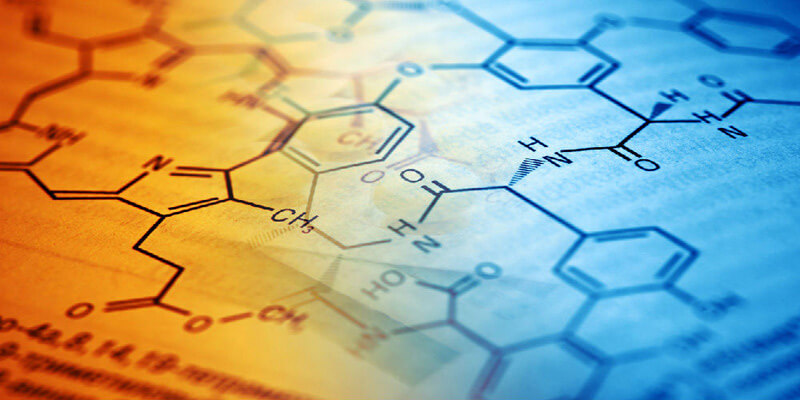 Jumpin Jack Flash Its a Gas

Is The Transformation Of American Families Changing The Nature Of...