Home Must Reads Coke In Your System, Blood On Your Hands

Dating back to the Incas, this naturally derived narcotic has been used for medicinal and recreational social use in it's various forms as a stimulant. Native to the mountains in South American, the leaves of the coca plant have been processed and synthesized into the white powder we have now call cocaine.

Cocaine is a highly addictive, rather expensive drug. With many ways to use, including snorting and mixing with water to form a liquid perfect for injecting into a readily available vein, the substance leaves the user with extreme euphoric feelings, an energy surge, a forced release of the body's natural "happy" chemical - dopamine, even hallucinations.

While those few symptoms probably don't seem so bad at first, there are also really unhealthy counterparts right below the surface. Including paranoia, chest pains, slurred speech, coughing, black or bloody sputum, thirst, body shakes, and dental erosions from malnutrition and the acidic cocaine.

With the help of underground tunnels, human "mules", private vehicles, specialized submarines, small helicopters, and airplanes cocaine had no time wasted spreading like wild fire, across borders and right into the noses, lungs and veins of anyone willing to try, becoming quite the party drug.

Just how many lives did it take to get that fix, that party favor?

Cocaine trafficking runs deep and it is often being moved by people who have no other choice. People coming in and out of the dangerous world as money is needed. Often times, being apart of the line ends with death as soon as the product exchanges hands.

It's easier to kill a mule than pay him.

In a recent article, by Slate, they touched on another case where innocent people who were at the wrong time and the wrong place were brutally killed. 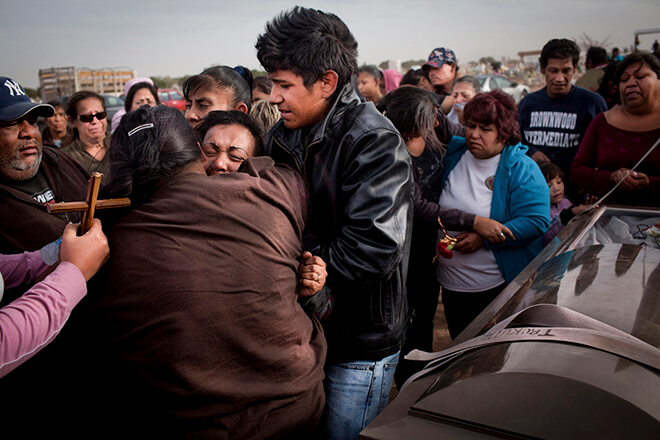 "Family and friends attend the funerals of three female victims of a massacre that left 13 dead and more than a dozen wounded in Ciudad Juarez, Mexico, in 2010. Most of the victims were between 14 and 20 years old and were attending a birthday party. They were herded into a corner of the house and executed by a firing squad. Armed men came looking for one young man, but when the patrons responded that he was not there, they opened fire."

In further web browsing, I found Borderland Beat tallied in 3,111 of drug violence related deaths in that city, in that year, alone.

But what fuels this war, all that bloodshed? The US does and it isn't cheap. We throw money at the fire with our inability to stop the smuggling of illegal weapons and our insatiable demand for illegal drugs. Despite the government crackdown, Columbia remains the biggest cocaine producer and destributor. Columbian drug lord and gangs are controlling the majority of New York, Boston, Philedelphia, and Miami. While Mexican gangsters bring it up through the border and provide the narcotic in most of major Western U.S. cities such as Phoenix, Las Vegas, Los Angeles, Seattle and San Francisco.

Modern 'Tweens' Have it Harder than Ever

Should Adopted Teens Search for Their Birth Parents?