Home Inspirational Can This Barbie Doll Save Millions of Girls From Hating Their Own Bodies? 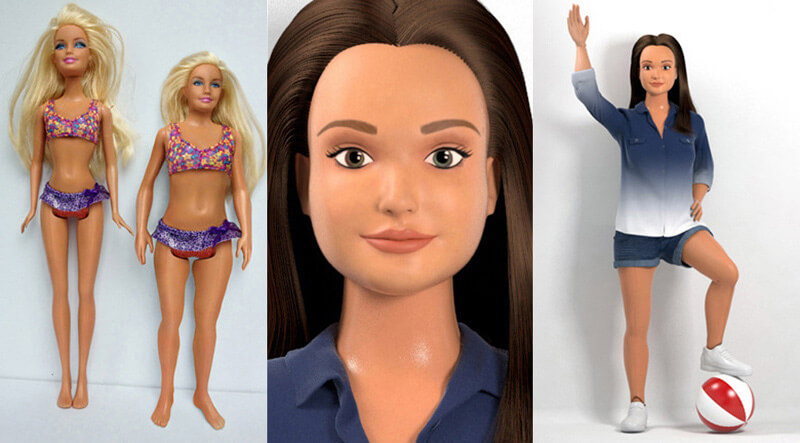 Barbie dolls have been around for over 50 years and billions have sold. While even at the beginning there was controversy about the unrealistic shape of Barbie’s body (consumers worried that it was “too sexual”), nothing has actually been done about it until now, with designer and artist Nickolay Lamm creating a doll he calls Lammily and simply terms, “the normal Barbie.”

Lamm is currently promoting the doll with 3D sketches. He needs close to $100,000 to start production, Buzzfeed reports, and already has the business-skill help of a former Mattel supervisor. The making of Lammily, he hopes, will give girls a better sense of reality as they play with and dress a doll that is made to look healthy and average.

Growing up, I always thought that I was going to look like Barbie when I got older—Not surprisingly, I still don’t look like her. I’ve worked hard to teach my girls about the difference between their body and an 11-inch doll’s because yes—they do play with them. One of my sons has played with them. But regardless, Barbie’s image, besides adding even more careers to her docket (doctor, veterinarian, president, life guard, elementary teacher, horse trainer) has remain unchanged. That’s why Lamm’s idea for “Lammily,” his “normal” Barbie-like doll, appeals to me so much.

I always loved playing Barbies—loved. I rarely played with baby dolls and instead preferred to play with Barbie or, more frequently, Barbie’s red-headed friend, Midge. Midge went to college. Midge had a Dick Tracey backpack. Midge wore white vinyl shoes on her upturned feet and I loved to play with her already-curled hair.

As we all know, Barbie (and her various friends) sport unrealistic body measurements. Their feet perpetually made for high heels and their breasts are far perkier than I could ever hope to achieve without plastic surgery (plastic—you see what I did there?). The proportions on Barbie are completely inaccurate of those for most women in the United States, even much thinner ones. In fact, “real-life” Barbie, model Valeria Yukanova, has done surgeries and other alterations on her own human body to make it “Barbie-like.” Her latest ideal is to live off air and water alone, in order to maintain her trim figure as well as get closer to “the light.” Currently, she is on a strict vegetarian-liquid-only diet. That drastic hourglass figure would be impossible to maintain otherwise.

In another human Barbie-doll attempt, a 38-year-old woman in California has also undergone multiple procedures—breast implants, chin liposuction, Botox, and spray tanning. She is even going through hypnotherapy in order to be “brainless,” stating on examiner.com, “I want people to see me as a plastic sex doll—and being brainless is a big part of that. When people ask why I want to be Barbie, I think, ‘Who wouldn’t want to be?’ She has the best life. All she does is shop and make herself look pretty.”

Recent shows such as Barbie: Life in the Dreamhouse, shown on YouTube and done in computer animation, somewhat make fun of Barbie and her insane lifestyle (see: cupcake sprinkles shortage and glitter geysers). There is no doubt that Barbie and her crew of equally perfect plastic friends have made a huge impact on modern conceptions of the ideal woman's body shape. New awareness is made all of the time about what healthier bodies are like, but the fact is that Barbie isn’t changing her style. Her long blonde hair, pencil waist, and gobs of makeup are always strongly highlighted. And as a mother of girls who enjoy Barbies, this concerns me.

I’m thrilled with the idea of Lammily, to give girls the option of having someone less-superficial to mimic their imagination as they play. If Lammily is a success, then perhaps Mattel and other companies will realize, finally, that we are serious. We want them to stop telling our daughters how they need to look, and combating every positive image we try to give modern body culture. Stop giving people everywhere a false ideal of perfection, as if a 6-inch waist were attainable—let alone preferable. These lovely girls that see Barbie every day are the future of our culture. Lammily may be one of the very important keys to unlocking a future filled with a much healthier perception of body image.

Can Gossip Be a Good Thing?