There are tens of millions of Star Wars fans throughout the world. In fact, statistically speaking - not to mention, the fact you are reading an article about Darth Vader's possible personality disorder diagnosis - you are probably among the fan-faithful of the 'Galaxy Far Far Away...' By that logic, it's also fair to assume that anyone reading this would likely agree: there is no cinematic villain in the history of film as prolific or beloved as Darth Vader.

For the millions of Star Wars fans - this writer obviously among them - the history of Darth Vader's fall from grace is a familiar one. Starting out as one of the Galaxy's most elite spiritual-soldiers/galactic protectors, otherwise known as,'The Jedi Knights,' Darth Vader - then known as Anakin Skywalker - was just as much hero to the defenseless, as he was a fierce opponent to the galaxy's tyrannical, Empire (evil, Nazi-like, space federation determined to rule the entire galaxy).

Then, after losing the love of his life, Anakin dramatically shifted from the consummate Jedi Knight to an outright evil villain, akin to an evil, genocidal maniac like that of  Adolf Hitler.

After undergoing such an inexplicable about-face of moral character and change of life-purpose, hardcore fans (those who take the Star Wars waaaaay too seriously and think Vader is real) collectively asked: Why and how did Luke's dad become such a heinous villain in the first place?

Well, believe it or not, according to French psychiatrists and psychologists, the cinematic villain has a Borderline Personality Disorder (BPD) diagnosis to blame for his Lucifer-like fall from grace.

Anakin's Fall From Grace: A Story of Borderline Personality Disorder 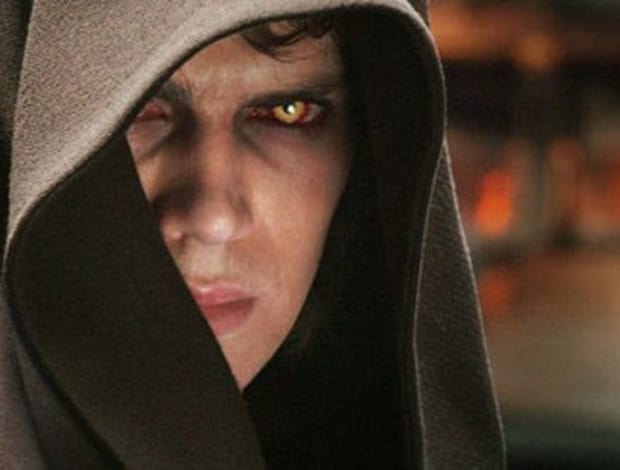 That's right, everyone's favorite, tragic antihero may be a character to be pitied rather than hated.

According to psychiatrist Eric Bui and researcher Rachel Rodgers (who have been using the Anakin/Vader story to teach their students about BPD), the Sith Lord hits six out of the nine borderline personality disorder criteria, one more than is needed for diagnosis.

What's more? The French researchers also suggest that Vader's diagnosis of BPD may be why he appeals to the teenage generation. According to Bui and Rodgers, borderline personality disorder is "fairly frequent among teens."

- Though, it should be noted that only adults can be diagnosed with borderline personality disorder under the DSM-IV guidelines -

Bui says, "He [Anakin/Vader] has difficulty controlling anger, stress-related breaks with reality, impulsivity, obsession with abandonment and a "pattern of unstable and intense interpersonal relationships characterized by alternating between extremes of ideation and devaluation."

The researchers point out that Vader is particularly sensitive to abandonment and has difficulty with asserting or even grasping his true identity amongst the emotional trauma he suffers internally - all symptoms of someone who suffers from borderline personality disorder.

Carolyn Kaufman, a clinical psychologist at Columbus Ohio, agrees with this diagnosis, " After all, he did become Darth Vader after being "very unsure of who he was and what he wanted."

" After all, he did become Darth Vader after being "very unsure of who he was and what he wanted."

Furthermore, the actual diagnosis of every fanboy's favorite villain - who, again, was studied and diagnosed by reputable and legitimate, behavioral scientists - seems to suggest that Star Wars is anything but a subject to scoff at. Regardless of whether you are a fan of George Lucas's saga or not, after reading this you must admit, there is more than meets the eye when it comes to the characters from "A long, long time ago... in a Galaxy far, far away."

For more reading, please visit the original article this post refers to:

Anakin Skywalker's eventual transformation into Darth Vader might have more to do with psychological issues than the Force, researchers hint.

The tragic hero of the "Star Wars" prequels displays patterns of instability and impulsivity in the second and third films that make him an obvious candidate for borderline personality disorder (BPD), according to French psychiatrists and psychologists.

Know How to Cope with Stress Or Your Stress Response May Kill You!