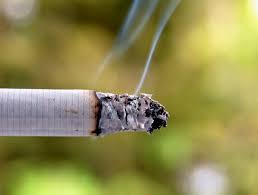 On a rainy day in Junior High, my mom provided me with a rare ride to school. We engaged in normal conversation about school, friends, and expected chores when I arrived home. Beyond the discussion, part of the ride included my mother smoking, something she started after my father passed away from an auto accident a few years earlier.

After being dropped off, I went to my locker as was customary to gather books and head to class. While at my locker, a student who had a locker next to mine, asked me if I smoked. This was not the first time I had been asked that question. Because my mother smoked, I often smelt like cigarette smoke as well. Yet, because it was such a normal part of my day, I was somewhat blind and even unaware of the pungent scent that was part of my daily cologne mixture.

While I was largely unaware of my odor, my friends were well aware of the daily residual nicotine and other chemicals in my hair, skin, and clothes. Today we know that this residue is thought to react with common indoor pollutants to create a toxic mix, we call it thirdhand smoke. Little did I know that the toxic mix of thirdhand smoke I was carrying contains cancer-causing substances, posing a potential health hazard to those who are exposed to it.

My mother was and still is a very loving and caring parent. Mom would often light her cigarette and keep the ashtray by an open window, even in winter. If we were in the car she would always roll the window down, holding the cigarette by the open window and when exhaling blow the smoke toward the open window. Clearly, she was doing all that she could to minimize our exposure to secondhand smoke. But what about when the smoke cleared, was the environment toxic free, possing no risk to our health?

Of course, 40 years ago we really didn't understand the effects of secondhand smoke, thirdhand smoke was not even considered. Third-hand smoke is tobacco smoke contamination that remains after the cigarette has been extinguished," says Jonathan Winickoff, a pediatrician at the Dana–Farber/Harvard Cancer Center in Boston and author of a study on the new phenomenon published in the journal Pediatrics. According to the study, many people, particularly smokers have no idea or consider thirdhand smoke—the mixture of toxins that penetrate and find residence in carpets, sofas, clothes and other materials after a cigarette is put out. We now know that the thirdhand smoke residue is a health hazard for infants and children and putting them at risk for illness and even possible death.

Like my mom, of the 1,500 smokers and nonsmokers Winickoff surveyed, the vast majority agreed that second-hand smoke is dangerous. But when asked whether they agreed with the statement, "Breathing air in a room today where people smoked yesterday can harm the health of infants and children," only 65 percent of nonsmokers and 43 percent of smokers answered "yes."

Recently my mother asked what I was writing about, I told her I was writing an article about thirdhand smoke. Her first response was, "What is that?" My mom's response is not atypical according to the research, most of us do not even consider the existence of thirdhand smoke, as well as possible exposure risks.

Dr. Lowell Dale, in a Mayo Clinic article, indicates that third-hand smoke, as mentioned before, refers to the tobacco toxins that build up over time. As people smoke, they add thirdhand deposits over and over again, building a thick toxic layer on everything within its reach. Dr. Dale further identifies that thirdhand smoke residue builds up on surfaces over time and resists normal cleaning. Thirdhand smoke can't be eliminated by opening up a window or turning on a fan in the attempt to air out the room.

Studies show, as my personal case study revealed years earlier, that thirdhand smoke clings to hair, skin, clothes, furniture, drapes, walls, bedding, carpets, dust, vehicles and other surfaces, long after smoking has stopped. Anyone exposed to thirdhand smoke are being impacted by the layers of toxins through touch or inhalation. While exposure effects everyone, infants and children are most at risk to tobacco-related health problems when they inhale, ingest or touch substances containing thirdhand smoke.

Why are the risks associated with exposure to third-hand smoke different for children than adults?

In Scientific American, Coco Ballantyne highlights that the developing brain is uniquely susceptible to extremely low levels of thirdhand smoke toxins. Crawling infants and toddlers spend significant amounts of time on the floor with feet, knees, and hands navigating through their environment. What is most concerning is that infants explore much of their environment by putting things in their mouths. This mouthing occurs while the infancts world is characterized by the most contaminated surfaces containing thirdhand smoke.

Additionally, while exposure to thirdhand contaminants is higher, children ingest twice the amount of dust that grown-ups do. Ballantyne provides an example where if a grown-up weighs 150 pounds and a baby weighs 15 pounds, the infant ingests twice the dust due to faster respiration and proximity to dusty surfaces. What does that mean? It means that the baby will get 20 times the exposure. The effect of health risks are significantly increased when they are experiencing 20 times the exposure.

While continued research will enlighten us to the health risks associated with thirdhand smoke, early findings suggest that third-hand smoke exposure, especially for infants and children is a real concern. Third-hand smoke heightens the need to not merely support smoke free areas, but an environment that has never been exposed to cigarette smoke. Implications for parents and all public areas suggest a renewed effort to look at public policy where smoking is allowed.