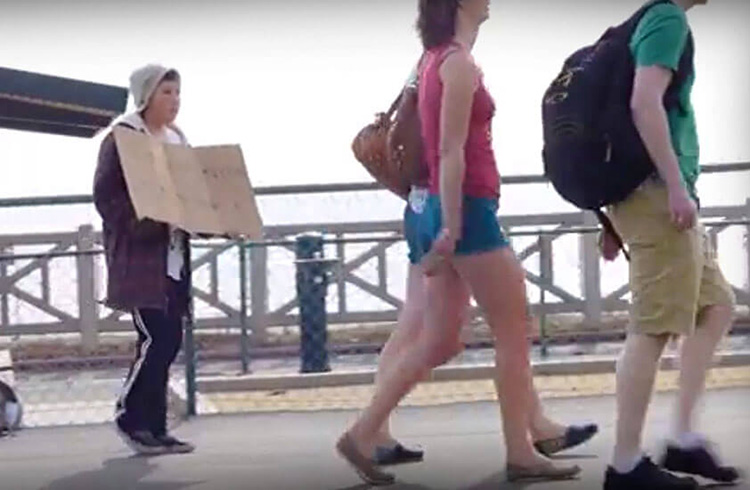 A boy stands on the street with a dirty face and sad eyes. He holds a cardboard sign that reads, “All I want is to buy my sister a meal.”

For hours, the boy, Nathan, stood on the street of a popular US city and held the sign. He was in a large shopping district where people walked by carrying bags from the expensive stores around them. But even when the boy, an actual child, followed people and was speaking to them, it was as if he wasn’t even there. Shoppers walked past him, sipping on drinks and clutching new clothes, and some did not even glance down.

One woman noticed the camera and told Yusef, the man behind the scenes how “disgusting” the behavior was—not of the ignorant Americans, but of Yusef and Nathan themselves. Yusef raged back, demanding to know why his methods of discovery were sicker than the adults walking blindly past a hungry and dirty child. She refused to relent and Yusef walked off with his arm around Nathan, with Nathan crying and saying, “Just—what happened to this world?”

What did happen to it? Every city, some more than others, has people begging for money or food—or both. When I visit Las Vegas, I see them everywhere and I will never forget one older woman crying as she stumbled from car to car at an intersection across from me, begging for a handout. The Wal-Mart parking lot always has one or two people asking for help and the latest one I saw added to his sign, “I have kids.”

As a mother myself, and just last year an unemployed and desperate one, I can well imagine the intense need these people may have. Note I said, “may,” because like so many others, I have become somewhat immune to these men and women. And as I often have my own children in the car, I am feeling ashamed—what have I been teaching them?

I might say to myself when seeing these people, “I don’t have enough”—I work very hard and still sometimes struggle to gather school supplies or another pair of shoes for the child that wears them out so quickly. But how can I say I don’t have enough when every night I come home to a warm home, filled with the people I love? I never, ever go hungry. And for some of these people, that is much more than enough.

As a Christian woman, I am also left to wonder—what if Jesus Christ, who prophesied of returning to Earth, was one of those men sitting quietly on the side of the street? What if I didn’t recognize His glory through the mass of untidy hair and the smudge-marks from the grease of His very old bicycle? Only to have that same Man stand before me on Judgment Day and not be able to see me?

This video, as Yusef hoped, has indeed changed my perception of those standing behind cardboard signs, their eyes sad and sometimes shamed. At the end of the clip, I cried, as something completely unexpected happened with a different soul. There is a valuable lesson to be learned here. What if, people?

E-Cig Regulations on the Horizon

Pot Is Just Too Easy To Get These Days