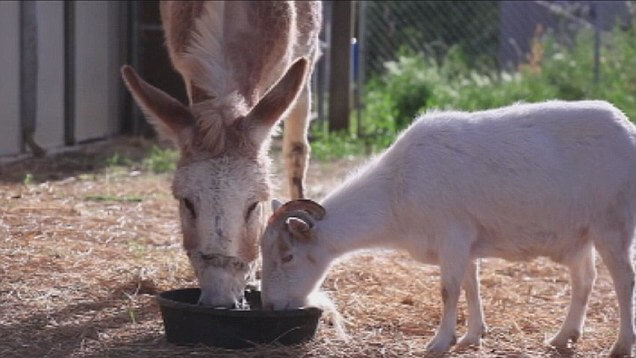 In a story that sounds like it was taken from the plot of a Disney movie, a goat named Mr. G was recently reunited with his best friend, a donkey named jellybean, after spending days refusing to eat or leave his pen. These two animals had belonged to an animal hoarder in Southern California, and they were separated after being sent to two different animal rescues. At this point, nobody realized how deep the connection between Mr. G and Jellybean was, but they quickly found out. The owners of the animal rescue that took in Mr. G were initially unable to figure out what might be wrong with him. Though he had no physical problems, Mr. G was clearly distressed to be away from his friend and wouldn't move from the corner of his pen. After some investigation, it was discovered that he used to spend all of his time with a donkey and they decided to reunite them to see if that might bring about some improvement. Watch this video and see how the power of friendship can even transcend species.

The Power Of Friendship

When Mr. G sees Jellybean and runs out of his pen for the first time in days, it's pretty obvious how happy he is. Keep in mind this is the first time he's moved in days. You can see how close these two animals really are when Mr. G doesn't even want to leave Jellybean's side. But what really makes this video powerful and moving is what it tells us about friendship and making a connection with others. For Mr. G, being with his friend is what made his life worth living. This goat understands what we all should realize, that it is the relationships in our life that really give it meaning. Without the people we care about, there really isn't any point. So as you go through your day, remember Mr. G and Jellybean and try to make time for the people you care about.

Is This Teen Singer The Unlikely Meeting Point Between Jeff Buckley...