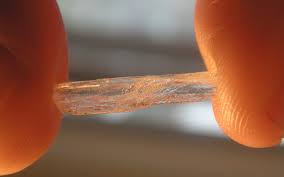 One of the most troubling aspects of drug use is that many drug users realize the damage that they are doing to themselves as they are doing it, and yet still they persist in partaking in what is obviously a dangerous and destructive habit. The habitual need to satisfy the drug craving is obviously so strong that in the mind of a drug addict, the good outweighs the bad. In this case, all the good is is a supression of the bad feelings that arise when the addict goes without the drugs.

You know the effect where when you live with someone, you may not notice the changes that their body or face undergoes over the period of a year? But when someone whom you haven't seen in a while sees them, the transformation is pronounced? We have to assume that this change is the same for meth addicts, who must not notice the physical toll the drug is taking on their face and overall appearance.

Now, let's acknowledge that drugs are more complicated than mere aesthetics could discourage. The reasons that so many youths fall into substance abuse vary nearly on a person by person basis. But if there was a tool that could stop even just one teen from using crystal meth, wouldn't it be worth it?

We found a website that will take a picture of you and show you what it would look like if you had let meth take over your life. It is a truly disturbing tool. Of course, this is just a tool, and maybe even could be considered a toy. But if you know someone who has begun to experiment with substance abuse, maybe this tool could help them realize the error in their ways?

All you have to do is search Google for real life images of those whose lives have been ravaged by meth abuse. Maybe this tool can help some teens from having to experience that horror for themselves.

If you know a teenager whose life has been turned upside down by crystal meth, call Red Rock Canyon School at 1-877-705-7831. Don't wait, it's absolutely imperative that they get training as soon as possible.

The Hunger Games Has Surprisingly Awesome Messages For Teens