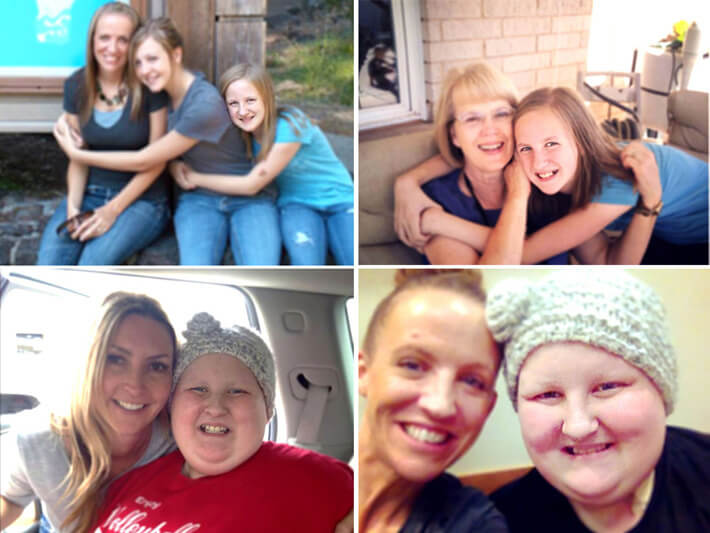 Everyone has heard of cancer. Not only that, nearly everyone has known someone with cancer. However, not many Americans have known someone that has had cancer at a very young age, and certainly not been acquainted with someone as courageous and inspirational as Jayci Glover.

Born in 2001 to Heather and Coby Glover, Jayci and her family began noticing that things were not right with her health in December of 2012. After numerous doctors and tests, Jayci and her parents discovered that the 12-year-old girl had cancer, and it was called Peripheral T-cell Lymphoma.

Lymphoma is the most common blood cancer, according to lymphoma.org, but Peripheral T-cell is rare. In fact, doctors called it that because they have just never seen a cancer exactly like Jayci's. Jayci's mother, Heather said to me, "Doctors and Pathologists from all over the nation were involved. They would all tell me, 'I know cancer when I see it and this is definitely cancer.' But it didn't match any known cancer. For weeks, they believed they would find a source tumor somewhere (lungs, stomach, etc) that had spread to the lymph nodes, but they never did. So ultimately they had to just treat what they could see and that was cancer in the lymphatic system. They told me that Peripheral T-Cell Lymphoma basically meant 'outside of any known lymphoma.'"

Peripheral T-cell lymphoma is not only rare, but aggressive, and attacked young Jayci’s body with a fury, causing numerous other problems and months of treatment, including chemotherapy and over 40 rounds of radiation. Through it all, Jayci has retained everything that has made her Jayci.

For such a young woman, Jayci, according to her friends and family, has kept a remarkable maturity through it all. “I have always said that I want to be like Jayci when I grow up,” her mother wrote on her Caring Bridge page, “and it is more true now than ever” (caringbridge.org).

An Inspiration To Everyone

With months of treatments away from home and family, Jayci was thrilled to see almost the entire city lined up to greet her when she returned to her hometown of Kanab, Utah, on February 7th of this year. She was stunned at the welcome she received and it only went from there. Singer Jordin Sparks heard of Jayci’s fight, and sang a song for the young girl, along with a personal message, stating, “It is incredible to see how strong you are, and how you’re fighting” (link).Country singer Eric Dodge dedicated one of his songs to her during his last concert, and numerous articles—including one from People magazine—have been written about her.

And why? No doubt that this teen is going through something horrendous, but what compels everyone to praise her so? Well, as two of her friends, Chloe Crosby and Jaysi Shakespeare put it, “It’s impossible for someone to be around Jayci and not feel her positive radiance and contagious strength.”

Jayci has accomplished more in just the last year than most of us manage in a lifetime. And she’s only thirteen. She’s inspired thousands of people, even across the country, as a young woman of humility and courage and grace. She has pushed ahead, even while completely ill, wanting to continue school, church, and just life. She has suffered from so much sickness, tests, treatments, and heartache and yet she is still always reaching outside of herself to value and love others.

Make a Wish Foundation, the charity that has provided terminal children with a wish of their choice for many years, was surprised when Jayci gave her request: A new scoreboard for the local high school. With a grandfather as the basketball coach and a mother and aunts who played there, it’s no doubt that she felt an affinity with the sport. But her selfless gift was still an astonishment, and amazing.

Jayci is home, surrounded by family and friends, even though the doctors were concerned about her making the five-hour trip from the hospital to Kanab. She is spending time doing what she loves most—just simply loving. Her friends have said that they remain around her, even when she has fallen asleep, stating, “Being in her presence is the best place anyone could be.”

We could all learn a million lessons from this girl who gives so unselfishly of herself. Her light and her emotion are what makes her so incredibly loved by all of those around her. Cancer did not change her. Remarkable physical change and illness did not ruin her. She is still living for hope and helping others to do the same.

When I asked Jayci's mother what she wanted the world to know about her beautiful daughter, she replied:

"I would most want people to know that she is just as amazing and inspiring as she seems! She is just like the main character from her favorite movie, Mary Poppins. 'Practically perfect in every way!' I truly want to be just like her. She is positive, and loving, and accepting, and responsible, and kind."

May the rest of us learn what true nobility is through the incredible example of Jayci Glover.

Study Finds that Empathy for Others' Pain is Rooted in...