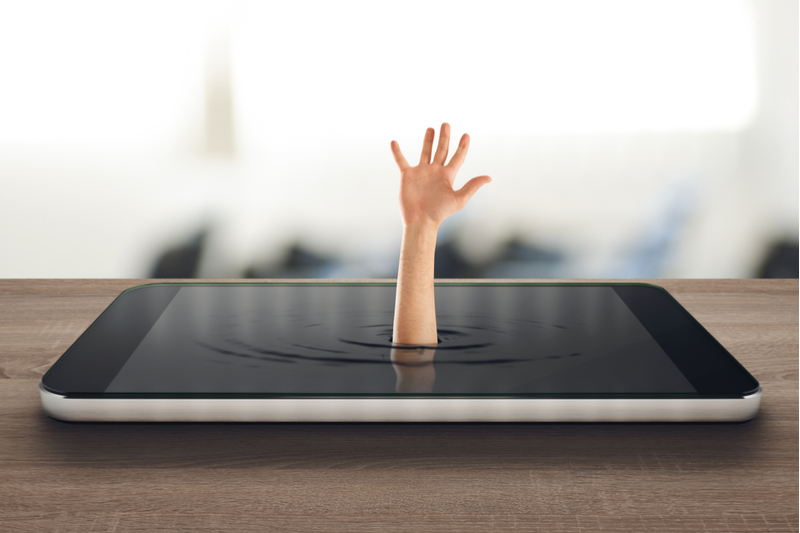 Smartphone Addiction is as Real and Serious as Cancer, No Joke

My friends joke about their phone being the least used app on their smartphone. But it’s becoming more and more true every day. Surveys report that upwards of 80% of the time spent on cell phones still involves using the actual phone, but with the onslaught of so many app options currently available, and the promise of so many more to come, that percent is bound to fade into entertainment oblivion.

When you think about it, how can a mere phone compete for attention when surfing the internet, listening to music, participating on social media, taking pics and making videos, buying stuff and playing games so effectively and insidiously lure your attention away from everyone and everything in the world around you?

Look what futurists say is coming down the smartphone pike: virtual reality, holographic displays, and companion-capable apps. I’m afraid there will come a day when calls will come in, phone apps will ring, and users across this land will not know what it is, or what to do. And leading the way will be iPhone, Android, Samsung, Huawei and Blackberry.

It’s Worse Than That

Ever hear the one about the woman who was so distracted byFacebook that she walked off a pier into icy waters? Sad thing is, it’s not a joke. It’s true. While visiting Australia and walking along a pier jutting out into the ocean, a woman was so intent on checking Facebook, she lost track of where she was and plunged into the chilly waters of Port Phillip Bay. Luckily for her, others who were not distracted by their cell phones, saw what happened and called for help immediately. Even more sad, despite the fall, hitting the water, and trying to swim to shore (word has it she didn’t know how to swim) the woman never let go of her smartphone.

Could this be the result of what is being unofficially called “Smartphone Addiction”?

“If you’ve ever questioned whether that twitchy feeling you get every time you scroll Instagram is a sign of actual addiction, you can officially stop wondering.”

Ninety percent of all adults own a cell phone.  88% of teens (13 to 17 years) have one, or more.  56% of children (8 to 12) use one, reports “Kids Wireless Use Facts.” And 67% of all cell phone users surveyed admitted to compulsively checking their cell phone even when it did not make a noise or vibrate.

According to PsychGuides.com, the signs and symptoms of this very real addiction include (cell phone addiction is not yet officially among addictions recognized in the Diagnostic and Statistical Manual of Mental Disorders):

Physical effects of this dangerous addiction include:

It’s Only Going to Get Worse

Catherine Hiley, in her article “Future Mobile Phones: What’s Coming Our Way?” says mobile phones, cell or smart, will become more and more embedded in our daily existence. Besides virtual, holographic and artificial intelligence-oriented apps in the future, new cell phone attractions will also include more eco-friendly materials that the phone is made of, be more flexible and durable than ever before, and be much educationally oriented.

The scariest thing about cell phone addiction is that it is entirely possible that our cell phones are altering our brains, says Karnasiewicz. When we read digital media, the arrangement of the links and ads, and attention-getting devices that get our attention in short bursts, along with all the scrolling and swiping, put us in a frantic, intensely focused state of constant distraction. Instead of training our brains to follow and think things through, we are instead getting used to jumping back and forth in a state of continuous temporariness.

There is hope for those of us who suffer from cell phone addiction, though, says Catherine Price, in her 2017-book called “How to Break Up With Your Cell Phone.” Although the average American adult already spends nearly 3 hours a day on their cell phones, which is only going to get worse, and with that time currently exceeding what we typically spent eating and drinking, we can start by first admitting that we have a problem.

If we can be brutally honest, there is available a Smartphone Compulsion Test online we can take to confirm our suspicions. We can download any number of tracking apps that will log how much time of our waking lives we actually spend on the phone. And we can banish cell phones from our bedrooms and dinner tables, relying on real alarm clocks and lively conversation during our meals.

Yes, cell or smartphone addiction is real, although not officially so. And, as is cancer, the addiction is serious, as it can greatly harm us in many emotional, physical and social ways. But in the end, there is help…by phone…at the Cellphone Addiction Rehab Center, by calling 1-888-997-3147.

Are Treatment Centers and Dr. Phil Susceptible To Frivolous Lawsuits?