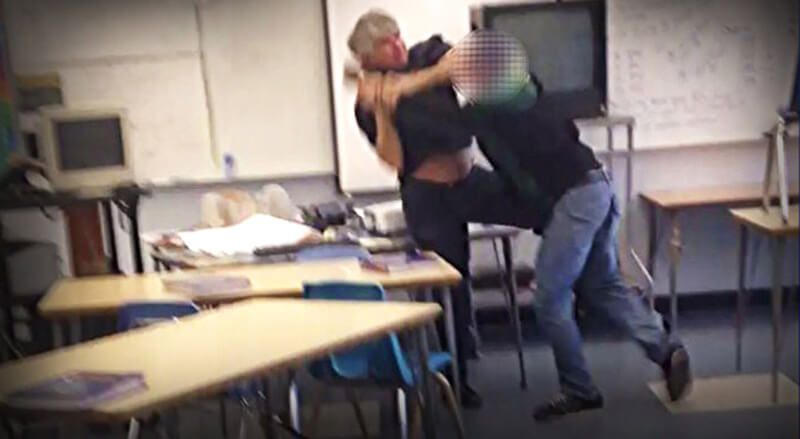 Mark Black, a science teacher and wrestling coach for Santa Monica High School, was suspended on Friday after a student recorded him trying to defend himself from a violent student. Black had caught the student, a young man, dealing marijuana in the classroom and the situation quickly escalated. The student attacked Black, who quickly reacted to defend himself.

What is surprising is that much of the media focus has been on demonizing Black. School Superintendent Sandra Lyon was quoted in the Los Angeles Times as saying the captured video was “utterly alarming” and the teacher’s use of physical restraint on the student “unacceptable.”

While Lyon has since retracted her statements, trying to assure the entire community—and the rest of us—that she will do right by Mark Black, media has already had a frenzy of judgmental reports, with newscasters bickering that he never should have touched the child—regardless of the child attacking him. That he should have merely “restrained” the student. If one actually watches the video, they will note that Black was trying hard to restrain the student, but the student was getting increasingly violent and it was impossible to merely stop him.

What is a teacher to do?

As a teacher myself, the backlash that Mr. Black is receiving is particularly appalling to me. Three times a week I stand in front of a room full of young adults and try to teach them the basics of English composition. At any moment one of those students—78% of them who are male and physically bigger and stronger than I am—could attack and I would do whatever I could to defend myself. Does the fact that Mr. Black is male, instead of female, mean that he has any fewer rights to physically defend himself?

Students and parents are rallying around the beloved teacher and coach. A Facebook page in support of Black has already generated over 10,000 likes, and a petition to reinstate him has been signed by hundreds. A person becomes a teacher not because it is a lucrative business but because they enjoy it. They genuinely want to help others learn and to help make better generations for the future. It can be assumed that Mark Black was after the same thing, and yet he is being hounded now for defending himself against a violent young man.

Those who think that Black was “unnecessarily” harsh need to step back and take a good look at what sort of culture we are promoting. Is a person merely off limits from the law and common decency because they are attending high school? Do we now think it is okay to treat our leaders like criminals instead of those who are actually committing the crime?