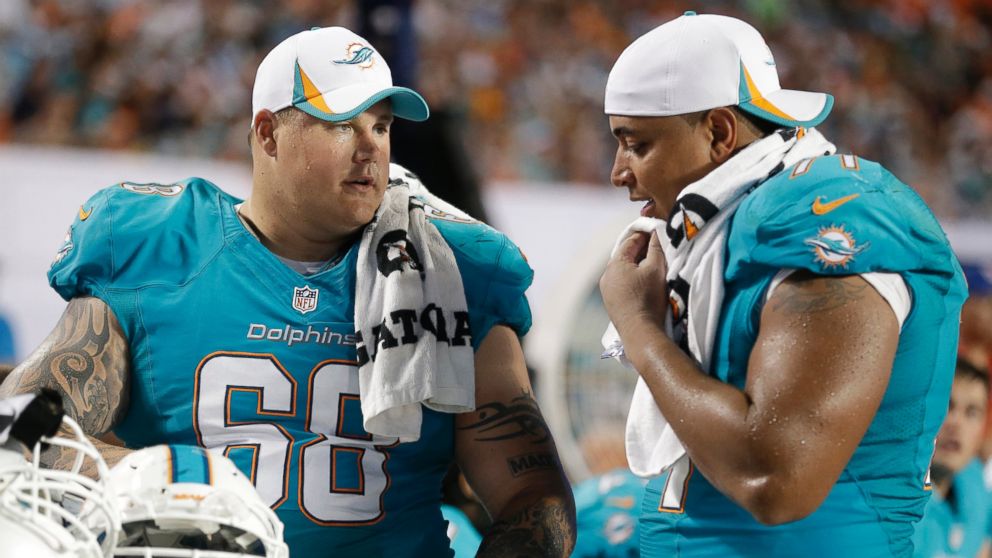 Teammates are supposed to be like friends but with an even more unbreakable bond, united by the common goal of defeating the opposing team. A lot of close friendships, especially in adolescence, can actually feel quite a bit like the camaraderie of being on the same team. In some ways, one group of friends is always pitted against another group of friends in subtle and sometimes unsubtle ways.

Friends provide a layer of protection just by being there, physically present. A lone target is much easier for a bully or some other jerk to pick on. But also, friends typically go the extra mile to protect each other. Friends should have your back. Just like teammates should protect each other on or off the field or court or wherever the game may be.

But sometimes, when the chemistry is just slightly wrong, there is the possibility for toxic friction among friends and teammates.

The situation that is now emerging in the case of the Miami Dolphins, involving the apparent bullying of Jonathan Martinby toward his teammate Richie Incognito, as well as other players, is a perfect example of the kind of fraught combination that I'm talking about.

There's an element of hazing that is still tolerated in many friend groups as well as many institutions. The NFL is no exception. New team members are routinely mistreated, made to degrade themselves by entertaining their inveterate fellow players on demand. They are sometimes taped to goal posts. They are sometimes made to carry equipment, or deliver food whenever it's demanded.

That behavior may be demeaning, but it's often excused as being part of a tradition. It's possible to come to the conclusion that none of that behavior crosses a line.

So where is the line? Well, much like in all friendships, the line can shift. But certainly, when one person deliberately sets out to hurt the feelings or reputation of another person, a line has been crossed.

Bullying can actually be all the more painful when it's done by a friend. There's a barrier that friends help you defend, and to deliberately set out to hurt a friend often feels like more than a betrayal.

I can personally recall a time when I was called over to a friend's house to play basketball. One of my other friends was there. I could tell there was something off in the air from the get-go. Sure enough, my other friend was deliberately fouling me all throughout the game. Eventually, we had a phsyical fight. Adrenaline often puts away feelings of physical pain when one is involved in a fight, but emotional pain still burns. I felt betrayed by both of my friends when I realized that they'd brought me over just to have this fight out. To this day, I still have no idea what predicated that tussle. The friends tried to smooth it over later, but we were never the same.

The situation between Incognito and Martin is troublesome because these men are examples, not just for other athletes, but large numbers of teenage boys look to these men as role models. The debate over whether athletes should be looked to as role models misses the point that we don't have a whole lot of control over who our kids look up to. We praise the NFL as a pinnacle of excellence and achievement, and then at the same time try to tell our kids that the men that play the game are fallible. Only one of those messages really resonates.

Regardless of what the outcome of the Incognito and Martin fracas amounts to, the damage is done. As NFL officials rush to defend the atmosphere of bullying that exists in the league, kids are seeing yet another example of institutionalized bullying  excused and explained away by officials.

Bullying is never OK. Teen boys need to understand that bullying can cause permanent emotional scars. It can instill a fear in kids that will haunt them for the rest of their days. Bullying sows the seeds of mistrust. It can make boys afraid to commit to their friendships, and skeptical of all of their relationships. It creates a culture of retaliation and foils collaboration at every turn. It represents dissonance, rather than harmony. Every man for himself, rather than teamwork.

These are not the values that we should be teaching young men.

If we want young men to succeed we need to help set them up for success by helping instill the values they'll need to achieve success in the future. Counter the message sent by the NFL by discussing bullying with your teens on game day.

Science Teacher Gets Into Classroom Brawl With Student