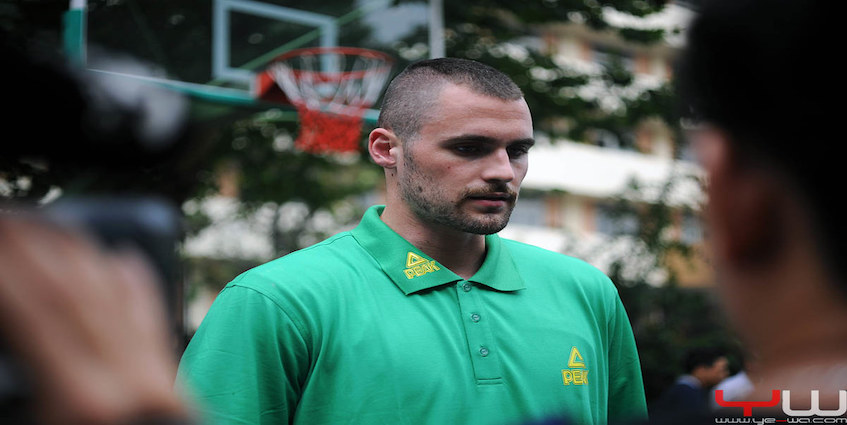 In the midst of today’s mental health crisis - as many as 25% of Americans experience mental health-related issues, annually - it is more important than ever that we have public figures who bravely choose to use their platform to spread mental health awareness.

Unfortunately, until very recently, the stigmatization of mental illness has largely prevented those in the public spotlight to speak out about mental health, especially when it comes to the subject of mental illness.

Thanks to a recent surge of brave celebrities in the last few years, however, we are beginning to see an increasing number of mentally ill stars break their silence on the matter, and, in NBA star, Kevin Love’s case, even choosing to use their platform to open up about what was once considered taboo: their personal experiences with mental illness.

Standing at 6’ 10,”  NBA Power Forward, Kevin Love strikes an imposing figure. The five-time all-star has had quite the career in his plus-ten years in the NBA, leaving his mark wherever he has played, often being the fan-favorite among the thousands who have seen him play.

While his accolades and overall legacy on the court are impressive on their own, it is his mental health-related issues that have garnered the all-star veteran the most attention as of late. Namely, his brave, unfettered honesty regarding his years’ long struggles with depression and anxiety which he had kept a secret, in fear that the stigmatization of being ‘mentally ill’ would be enough for his coaches, fellow players, and even millions of adoring fans to lose confidence in his ability to perform.

His years-long struggle with depression and anxiety came to a head after a November 5th, 2017, at the Quicken Loans Arena in Cleveland.

Love's Very Public Episode That Started it All

Having only scored 1-6 baskets from the field and after committing four fouls halfway into the third quarter, his coach decided to pull the 5-time All-star out of the game.

The nationally televised and embarrassing moment was seen by thousands of fans watching from the stands and broadcasted to millions more watching from home. His uncharacteristic struggles on the court left commentators dumbfounded as they were left to speculate as to what was causing the All-star’s on-the-court problems.

What no one knew at the time, however, was that Love had experienced a full-blown panic attack on the court, which culminated with him collapsing on the floor in the team’s trainer’s office.

“I couldn’t catch my breath,” Love says. “I was sticking my hand down my throat trying to clear my air passage. I thought I was having a heart attack and ended up unconscious on the floor of our head trainer’s office.”

In Love’s mind at the time, the situation felt much worse than what he would soon find out was nothing more than a stress-induced panic attack, “This is it." he said to himself, "I’m having a heart attack, I’m going to die.”

After learning that what he had actually experienced was a panic attack - and not his initial fears: life-threatening heart-related issues - Love decided to keep his episode and anxiety diagnosis a well-guarded secret from his team and organization for several months.

In his mind at the time, telling the public about his mental health issues would have given him a reputation of being unreliable. Or worse: he might be branded by a stigma that could potentially result in his illustrious career ending in embarrassment and shame - again, in his mind.

Unbelievably, in spite of keeping his serious mental illness secret from the rest of the world, Love finished the season out strong, even earning yet another spot on the  All-Star team (he wasn’t able to actually participate in the game due to a hand injury).

NBA Star Now Courageously Uses His Public Platform to Spread Awareness about Mental Health, Inspiring Millions of Others in the Process

It wasn’t until the following March that Kevin Love came out publicly with the truth surrounding his very-public episode that aired to millions of fans watching from home.

On March 6th Love penned the now-famous essay titled “Everyone is Going Through Something” for The Players’ Tribune.

As Men’s Health Magazine put it: 'The essay functioned not only as a confession but also as a deep exploration of how notions of masculinity have stigmatized men talking openly about mental health and seeking treatment.'

In the year since, Love has gone above and beyond to do everything in his power to abolish the stigma surrounding mental illness, particularly regarding young men in athletics who are largely taught from an early age to ‘suck it up’ and to ‘pull themselves by their boot-straps’ when facing any mentally, or emotionally-related obstacles or adversities.

As for how he views mental health, specifically when it comes to openly talking about ones’ struggles with mental illness, Love states:

“These superheroes that we look at, whether it be somebody in the entertainment industry or an athlete, we also have these layers that we deal with on a daily basis. Know that you’re not alone. You’re not different. You’re not weird. And we can do this stuff together.”

As for his advice to any young men or women who are afraid to talk about their mental health-related issues, the five-time NBA All-Star had this to say:

"You’re not different. You’re not weird. And we can do this stuff together.”

Encouraging words from a brave man. We should consider athletes and other public figures like Kevin Love, as heroes to look up to; warriors in the fight to end the stigmatization of mental illness - an epidemic that only grows stronger and deadlier when we choose to stay silent.

Our Justice System is Failing Teens of Color But One...