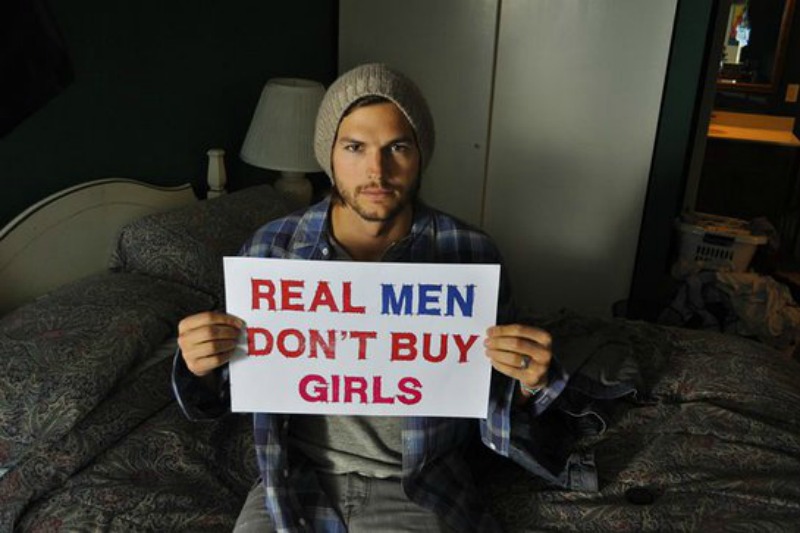 While much of Hollywood’s A-list celebrities are quick to use their fame as a platform to voice their complaints about political and social injustices, even the most vocal within the entertainment industry rarely choose to turn their passionate words into action.

Ashton Kutcher: A Courageous Champion from the Hills of Fake Heroes

The “all-talk/no-action” approach that many within the entertainment industry adopt as their own form of inactive activism, leaves many Americans with the impression that much of Hollywood’s progressive motives and supposed passion for changing 'a broken system' is nothing more than a performance of moral superiority and superficiality – a performance that, at best, serves as an exaggerated flame that is intended to shine a bright light on ignored and serious societal issues (racism, sexism, homophobia, transphobia, violence etc.) but nonetheless, often one that is ineffective in promoting actual, societal change to said issues.

In other words, Hollywood’s activism often comes off as condemning and self-righteous, rather than effective and impactful.

Its critics even go as far as to say that Hollywood is nothing more than a superficial consortium of elitist sell-outs, a supposed pro-social group of famously overpaid complainers whose entire political and societal activism includes throwing shade at the political right, and/or “bitching” about the deteriorating state of the Nation. To their critics -- many of whom stars inaccurately and publically dismiss as being redneck, backwards people from “flyover country” -- politically active A-list actors are quick to voice their opinions about societal discourse, but in the end, are nothing more than hubris-affirming entertainers who do nothing to change or improve upon the very issues of which they are so passionately advocating to change.

However, even the staunchest critics of Hollywood’s ‘Elitist-liberals’ have to recognize that there is true heroism that occasionally takes the spotlight from the entertainment industry's sizable population of 'fake heroes.'

Yes, even the most ardent critics of Hollywood Hills' reputation of phoniness must admit that, among those polarizing pseudo-progressive thespians and condemning, self-righteous entertainers, there are still famous men and women whose noble activism and genuine dedication to bettering the lives of those in need, surpass both, political partisanship and stereotypical, “Hollywood superficiality.” More to the point, and generalized cynicism aside, there are those who use their fame as a platform to change the world for the better, even undisputedly and bi-partisanly so.

For those in need of proof regarding this fable of "benevolent celebrity nobility," one need look no further than what is perhaps the most inspirational example of a box-office A-lister whose off-screen heroics are enough to overshadow their on-screen accolades, TV’s favorite beautiful idiot, Ashton Kutcher.

Forget Michael Kelso, Ashton Kutcher is a True Champion for Those Who Cannot Defend or Save Themselves from Sexual Abuse, Exploitation, or even Slavery

While most of us remember Kutcher for his memorable portrayals of lovable but cartoonish-ly stupid characters -- namely, Michael Kelso from Fox’s late-90’s hit ‘That 70’s show’ – the real-life Ashton is actually a highly intelligent and caring man of superhero-like integrity and determination.

For those who are unfamiliar with the “Real Ashton Kutcher” (no, not the prankster from MTV’s idiotic, albeit admittedly sinfully entertaining, show, ‘Punk’d’) you’ll be surprised to find out that the actor commits the majority of his time off-screen working on and promoting his humanitarian business venture known as, THORN: Digital Defenders of Children.

THORN, which was co-founded by Kutcher’s ex-wife/fellow A-list star, Demi Moore back in 2009, is an international anti-human trafficking organization that strives to address, and furthermore, eradicate, all forms of the sexual exploitation of children. More specifically, THORN, previously known as ‘DNA Foundation,’ is a software company that, through its programming efforts, focuses on tracking the internet’s facilitation of child pornography and human trafficking – a facilitation that makes up approximately 80% of the internet’s ‘Dark-web’ markets.

THORN’s efforts, largely spearheaded by Kutcher himself, have proven to be extraordinarily effective. According to recent comments he made during an appearance on NBC’s early-morning program, ‘The Today Show,’ Ashton’s prized business venture has aided the FBI in rescuing more than 6,000 human-trafficking victims - 2,000 of whom were children, rescued in an astonishingly brief six month period - who were kidnapped from their homes and sold into America’s ever expanding sex-slave trade. Successfully assisting the FBI and local law enforcement agencies in rescuing 6,000 victims even came as a shock to the internet superheroes, THORN, themselves, who more than easily surpassed their rather ambitious initial goal of saving 5,000 lives in a single year.

But Mr. Kutcher and his organization’s efforts have not stopped there. In addition to saving the lives of 2,000 defenseless, exploited children, THORN also played an integral role in assisting law enforcement in arresting 2,000 abhorrent men and woman who either, directly or indirectly (such as purchasing child pornography) participated in the sexual exploitation, kidnapping, and/or abuse of abducted children.

Just how involved in the day-to-day operations of THORN is Ashton Kutcher?

For those who question the significance of Kutcher’s role within the child-saving organization need look no further than the actor’s emotional speech that he gave to the Senate Foreign Relations Committee in February. During the nationally broadcasted Senate hearing, Mr. Kutcher discussed his personal involvement within THORN’s operations and even called out the Senate saying that “there is far more that can be done to tackle child sex abuse.”

Simply put, Ashton Kutcher is “uncharacteristically” serious about saving the lives of children and ending the sexual exploitation of defenseless children. Even the biggest haters of “Hollywood’s elite” must yield their blanketed and generalized criticisms of those blessed with fame after witnessing the emotional testimony Mr. Kutcher gave to the Senate Foreign Relations.

Fully aware that the largest obstacle he and his organization faced during his televised plea to the Senate would (probably) come from the public’s widespread and incorrect perception of Ashton Kutcher as the goofily-idiotic pretty boy as seen on TV, the savvy 39-year old actor and father of two began the Senate hearing by listing his humanitarian credentials:

The actor continued to give details on how intimately his involvement was in helping law enforcement:

"I've been on FBI raids where I've seen things that no person should ever see. I've seen video content of a child that's the same age as mine being raped by an American man that was a sex tourist in Cambodia. And this child was so conditioned by her environment that she thought she was engaging in play."

As if Ashton’s personal commitment and THORN’s credibility wasn’t validated enough by this point, Mr. Kutcher went on to state that his team received a call from the Department of Homeland Security (DHS) who were in need of their help. The DHS – whose responsibilities include providing cyber-security in addition to its anti-terrorism, border security and customs obligations – reached out to Kutcher’s team asking for their assistance to find a seven-year-old girl after her video of her sexual abuse “spread around the dark web.”

However, after addressing the irony of the tragic situation, Mr. Kutcher solidified his stance and therefore, his credibility, regarding his dedication to his largely unknown, recent life’s work by stating, "That's my day job and I'm sticking to it."

While Kutcher's business venture of saving the lives of children goes back nearly a decade, most of America has just recently become aware of his heroic "day job." His recent entrepreneurial public notoriety is largely thanks to his television appearances, like the one he recently gave on the 'Today Show.'

During his appearance on 'The Today Show,' Kutcher was quick to switch the conversation from himself in order to speak on behalf of THORN, its mission to end child sexual exploitation, and its progress thus far in seeing that mission come to fruition. What is perhaps the most admirable part of his public discussion on the national morning show is the fact that he was obviously invited on-set to plug his Netflix hit series, 'The Ranch,' which he vaguely and less passionately touched on before excitingly and devotedly switching the topic of conversation:

By switching the topic from himself and his show (really, his livelihood) to THORN's crucial mission, Ashton unselfishly furthered his organization's cause, thus saving the lives of future children in the process.

But perhaps the most impactful piece of marketing for his business venture and its humanitarian mission came from his passionate Senate hearing last February.

Kutcher’s testimony was certainly an eye-opening one. Listening to the actor describe sickening details about the depravity he encountered while helping law enforcement track down predators and rescue children speaks volumes as to how dedicated he is to THORN’s mission in ending the sexual exploitation, slavery, and abuse of children.

Additionally, Kutcher’s testimony, although chilling, serves as an inspirational tale of encouragement. In a country that is divisive as it is proud, it is invigorating to witness a polarized public figure dedicating his life to a cause that transcends partisanship rivalry and cultural divisiveness.

For those who are fans of Kutcher’s hilariously loveable characters and occasional serious roles from his illustrious TV and movie catalog (this blogger among them), they can now add ‘inspirational’ to their list of reasons of why they love the successful entertainer turned entrepreneurial humanitarian.

And to those who aren’t a fan of his acting -- as well as those who remain unimpressed by the tantalizing grip of Hollywoodland’s public allure -- at least you can appreciate Ashton’s newest character that is by far his most important role of all: American Hero.